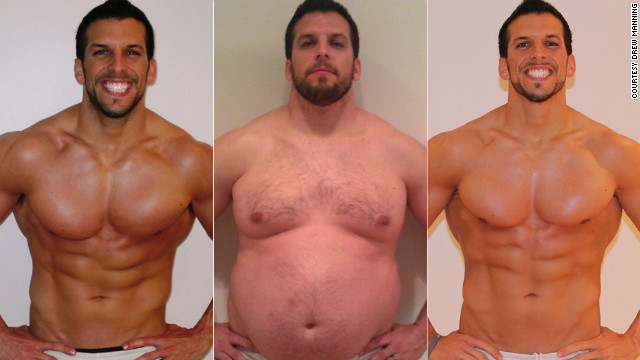 Fitness trainer Drew Manning gained 70 pounds in six months, then lost it all before a year was up.

(CNN) — When Drew Manning stepped out from behind the cardboard cutout of his former fat self on Monday, the audience of “Good Morning America” was appropriately shocked.

The fitness trainer’s journey had come to an end after successfully losing more than 70 pounds — six months after he purposely gained the same amount. “Like it never happened,” host George Stephanopoulos said.

“Kind of,” Manning said. Both Manning and his wife, Lynn, can attest that a lot actually has changed in the past year. While Manning’s body may have returned to its six-pack heydays, his mind, in many ways, has not.

Always a fitness junkie, staying in shape comes naturally for Manning. He’s that guy at the gym the rest of us love to hate, the one who likes to use his biceps for pumping iron instead of changing channels, and who prefers sucking down a spinach shake to indulging in a brownie sundae. 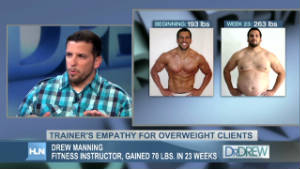 Because of that, Manning was a “judgmental” trainer, his wife says. “He would look at someone who was overweight and say, ‘They must really be lazy.’

“I was convinced people used genetics or similar excuses as a crutch,” Manning writes in his new book, “Fit2Fat2Fit.” “You either wanted to be healthy or you didn’t.”

That point of view wasn’t helping Manning help his clients. When he failed yet again to push someone over to the light side, he knew something was wrong. In order to better understand the struggles his clients were facing, he had to face them himself.

He gave up the gym and started consuming junk food, fast food and soda. In just six months, he went from 193 pounds with a 34-inch waist to 265 pounds with a 48-inch waist.

Lynn saw the difference in her husband in less time than that. He became lethargic, stopped helping around the house and was less than eager to play with their 2-year-old daughter.

“He was so insecure — saying ‘I’m so fat. I look so horrible,’ constantly complaining about how he looks,” she said.

Manning says he didn’t realize the effects of his weight gain would be more than physical. It altered his relationships and his self-confidence. Returning to the gym after the Fit2Fat portion of his journey made him nervous. The fact that he had to do push-ups on his knees was almost humiliating.

Of course, Manning had his critics. Experts said that his stunt was dangerous. His blood pressure and cholesterol shot up with such dramatic weight gain. But Manning has no regrets. The followers on his website have encouraged him with their own tales of weight loss.

“We see the success stories of people losing all this weight, but it’s more common now,” he says. “To see someone do it in reverse on purpose — it’s mind blowing. A balance of craziness and inspiration.”

Manning suffered through soda deprivation headaches and food cravings on his way back to fit. The journey was easier for him than for most, he’ll admit, but he’s eager now to provide tips for others to follow in his footsteps.

Lynn is just glad to have her husband back, maybe a bit better than he was before. Before Fit2Fat2Fit, the self-described foodie wife would make treats, and Manning wouldn’t even look at them.